Klik på billedet for at hente det i stort format 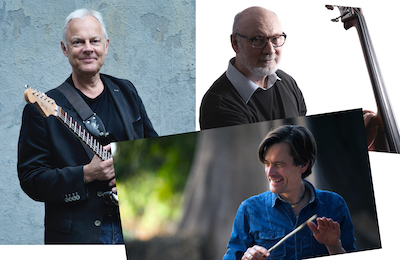 Over the years, I have managed to get quite a few appreciative opinions and reviews, especially on my solo albums. I also managed to go through many years of career without attracting too much attention. My album ‘Kiss My Jazz’ from 1998 received an award from the Danish Music Council for its artistic quality. Then came the award ‘Gaffelprisen’ (title refers to a tuning fork) in 2006 to guitarist Uffe Steen and me. Once a year, the ‘Ben Webster Foundation’ awards the Ben Webster Prize to outstanding talents, and with relatively few exceptions, only to jazz musicians in Copenhagen. Several of my bass colleagues have received the prize, I have grown old in the meantime, but one day in February 2022, a call came from chairman Jesper Løvdal. The foundation has created a category for aging jazz musicians who, through a long and sustained life as musicians, have made a difference. Here I just came into the picture, and I step into the company of seven other personalities from the Copenhagen area, who will also receive the honorary award. This is the first time that the prize has been awarded to more than one musician. The award recipients besides myself are Ann Farholt, Ole Olsen, Niels ‘Flipper’ Stuart, Leonardo Pedersen, Henrik Bay, Kjeld Lauritsen and Mikkel Find.

I consider it a positive pat on the back and I really think the award should go to my wife Britt as well. She has largely kept the family together, while I played my bass. And then I’m guessing that the Corona crisis has been pushing a crowd of new honorary candidates in front of it into the uncertain future, and now revenge should be taken.

The ceremony took place on 22 May 2022 in the theater and music house ‘Portalen’ Greve, where the prize, also the Ben Webster prize itself for one of the younger, big band organizer Kathrine Windfeld, was fully deserved. She acknowledged with a small speech of thanks and a concert with her young big band, which has garnered so much recognition for both performances at jazz festivals around Europe and several record releases. The music was of high quality and really well put together so it sounded like a big band. Also very complex in expression due to Kathrine’s arrangements, which require something of the listener.

Then there was a break and transition to a band that consisted of the aforementioned eight honorary award recipients. After 8 awards ceremonies, 8 motivational speeches and 8 pieces of music that predominantly sounded in the spirit of Ben Webster, it was over.

My bass fingers got busy working, and when I received my award, it happened together with Kjeld Lauritsen, who was also the award recipient, and we signed with the Argentine musician Astor Piazolla’s composition “Oblivion”. This piece of music stood out, by our mutual agreement, as being less in the Webster style. Nice room for the sound because we were only two, and a very nice response from the audience. It greatly contributed to the breadth of the program. I had a festive afternoon, went to a hotel with my wife and drove to my hometown Aarhus the next day.