Fortsæt til primært indhold
‘A Secret Sigh’ is my 9th solo album project.
Publication by GatewayMusic: 8. October 2016
The album consists of 12 original compositions.. 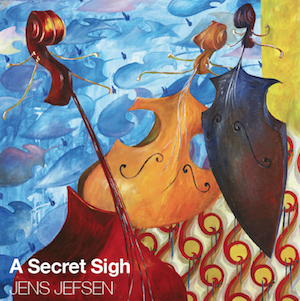 Musicians in addition to yours truly on acoustic bass:

Veteran Danish bassist Jens Jefsen could be a one-man band, but instead he accomplishes a rare feat here: a bass-centric recording that does not sound like a “bass album.” Each track includes multiple bass parts—pizzicato and arco—along with percussive bass sounds and other percussion by Jefsen. While this description may sound like an endless bass solo, the music is carefully arranged instead, with the bass often taking a lyrical lead role. And all but one of the tunes includes at least one of the nine featured musicians, providing a constantly shifting group sound.

The opener “How You Like Your Egg” is a catchy contemporary jazz tune employing a lead bass part with a bass ensemble, along with drums and percussion from Morten Lund, and a bit of accompaniment from guitarist Uffe Steen. Later Steen steps out with memorable solo, and there’s even a brief bit of vocalise. “Bashtag” features call and response from clarinetist Michael Bladt and bandoneonist Christian Gerber; Gerber also duets with vocalist Julie Huetland on “Crying Wine.” Cellist Maria Edlund provides counterpoint on “Behavior Modification,” both strings playing over an insistent ostinato from Jefsen.

“Benefit Of Waiting” shows how effective Jefsen’s “bass percussion” can be, as he turns in a convincing conga imitation during keyboardist Hans Esbjerg’s solo (along with swinging walking bass). He does it again on the aptly titled “Wood And Salsa.” “Condash” is another track with a full band sound. Bladt’s saxophone takes the lead (as well as a fine solo), with Lundt’s drums providing a true rhythm section feel—nice bit of keyboard accompaniment from the leader as well. The title tune has a haunting theme, Jefsen’s bass doubled by Oskar Hougaard Jefson’s vocalise. “Bass Meets Saw” is the only tune with no other musicians, and is exactly what the title says. In this case it’s a musical saw, not the sound of a double bass being cut in half (something I would not put past Jefsen’s occasionally puckish sense of humor).

A diverse and often fun album, and a splendid showcase for Jefsen’s composing, bass playing, and “other weird stuff…” (as the credits would have it). Highly recommended to double bass fans, but there’s plenty here for any contemporary jazz lover.

Veteran Danish double bass player and music educator Jens Jefsen performed with some of the greatest American jazz  musicians – Dizzy gillespie, Dexter Gordon, Ben Webster, Johnny Griffin and Roy Eldridge, among many others, still, his own definition of jazz is much more inclusive. Jefsen ninth solo album, «A Secret Sigh», offers his unique vision to a bass-centered jazz album that does not sound too much deep-toned.

Jefsen began working on this album in his mini studio, recording 12 original compositions, himself playing alone multiple parts on the double bass, basic rhythmic patterns and leading roles. Then he invited to his studio nine musicians – among them drummer Morten Lund and trumpeter Jakob Buchanan, one at the time, and asked them to add their «fresh charm» to the basic solo bass pieces.